In looking for a new challenge we often gravitate towards our hobbies or interests to give us inspiration. But not always…..

As a ‘less than occasional cyclist’ Kim Haddaway decided to jump in at the deep end by joining a charity cycle expedition from London to Paris. Now all she needed to do was to buy a bike.

In her own words, this is Kim’s account of her adventure.

At the beginning of another New Year, I started thinking back to January 2013, the start of my challenging yet amazing Paris by bicycle….

Post Christmas blues and needing a project, something to motivate me, I flicked through the Big Issue (magazine). Here it was. London to Paris bike ride, covering 230 miles in 3 days, and finishing in Paris the same day as the Tour de France. Before I could think too much about it, I’d registered.

I had to raise £1500 for the Big Issue (a charity that supports the homeless by offering the chance for self-employment). I’d done sponsored events before. It couldn’t be that hard, could it?

I forgot, yes it is. Having raised funds for ‘Scope’ before, I learnt an interesting lesson that lots of people are more willing to give to disabled children than support homeless people.

“After all, it’s their own fault” was one of the comments I heard, whilst waving my bucket, dressed as a giant pink rabbit.

I was very pleased I got a nice bike from a cycle project at a local homeless hostel, it felt very appropriate.

However, after leaving my bike unlocked, in my garden while I went to Spain for 3 weeks, I shouldn’t really have been surprised that it wasn’t there when I returned. I know, I know. I was left kicking myself for being such a plonker!

An appeal through the local paper just produced a few xenophobic rants about Big Issue vendors all being from Eastern Europe and owning expensive cars. What?? But no bike.

My second bike came from e bay, a birthday present from my Dad. It seemed quite light. What did I know? I did feel a little uneasy, a week before the start, when I was chatting to a guy at the pub stop of a Sunday morning ride. He looked at my bike and said “Are you doing it on that?”

For some strange reason, stationary cycling, in the dark, with loud music and someone shouting at me to go faster, harder with more resistance is what it takes to get me going? Regular spinning classes at the gym were topped up by cycle club rides and once (almost!) round the Isle of Wight. I felt ready.

The big day arrives. Hottest temperatures of the year forecast, followed by warning e mails from the Big Issue about keeping hydrated and assurances about medics being available. Help!

Thank you to my lovely neighbour who gave me a lift to the start at Richmond. He taped my 99p windmill, to my luggage rack. A beep on my 99p horn and I’m off, cycling to Portsmouth (5 miles from where I live). Accompanied by 50 other riders and the nicest bunch of cycling guides you could wish for. Incidentally, the group loved the flower windmill, which made it all the way to Paris, minus one or two petals. I think they were more divided over the horn!

First day. Hot. Beautiful views over the Downs. Lots of hills. Hard, but exhilarating. Arrive in Portsmouth. Shower, onto ferry.

Mistake – I wash my only pair of cycling shorts and leave to dry overnight. Bunk. Sleep.

Second day. Hotter. Early wake up. Arrive in Caen. 90 miles today! My cycling shorts are still wet. Oh well, they’ll soon dry. Early start along the canal. Beautiful French countryside. More hills. Then long stretch of plain, very windy. At this point, the gradual realisation that my bike is quite a lot heavier than most other peoples’ road bikes. Struggling to keep up with the group. Neal, the guide was so lovely – hand on my back to help me keep up. Tears not far away.

The Event is so well organised, with water supplied regularly, plus great snack and meal stops. Fantastic camaraderie. However, so relieved to reach hotel that night. Given Big Issue red, black and white cycling top to wear for the final push into Paris tomorrow.

Not a good night. Felt sick all night, headaches, dizzy. Am sure I’m not dehydrated, as I’ve taken on gallons of water. So worried that after two hard days, I won’t be able to cycle in the morning. 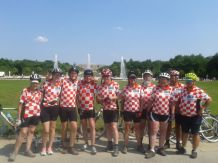 ays it’s probably mild sunstroke. Up to me what I do! Support van is always an option….

Determined, I start early with the back group, still nauseous. I HAVE to do this. My new team is full of great people, including Steve, the chief exec of Big Issue; 2 ex Big Issue vendors; a French couple on a tandem who have done this before and at least 3 people in their 70s, including Ann who has done this 6 TIMES before. Feel humble.

Gradually I am feeling better and better, so that by the first break, I’m able to eat. Lots! Relief. The only down side is the area between the top of my right leg and my bottom, which has been rubbed raw. Note to self – don’t cycle in wet shorts!

see and round and round the Arc de Triomphe together. Crazy and amazing. Then off to Tour Eiffel for photos and a welcome beer. What an experience!

Writing this has brought back amazing memories. What can I take on this year, I wonder….

And for anyone considering completing a charity bike ride. DO IT!

A bit about me…. I am not in the full bloom of youth (not far off retiring). I have always enjoyed sports, playing hockey for years, then becoming a bit lazy before doing a bit of running, culminating in completing the Brighton marathon in 2010 (never again!) Before my Paris adventure, I had occasionally cycled to the shops, but no further. It’s a bit addictive! 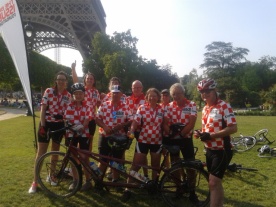 One thought on “Guest Blog – Paris or bust!!”