I’m going to start with just 2 words, Bloody Brexit.
Please treat both of the above as swear words from now on as Brexit is the reason I’ve just spent 13 hot and sweaty hours on an overnight bus to travel across France to Italy.
Some may prefer this option to cycling over the mountain ranges between the 2 countries but I would have happily chosen to ride it if it weren’t for Brexit. Because of Brexit we have found many small annoyances have cropped up since last travelling.
For example our mobile phone provider now imposes expensive daily roaming charges for usage which was free just a few months ago.
ATMs also impose a fee for non-european withdrawals and the simple posting home of spare t-shirts and bike bits required 20 euros, numerous customs declaration forms and a degree in foreign policy for us now non EU members.
The biggest drawback however, and what many people don’t realise either side of the divide, is that due to Brexit, Britons can now only spend 3 months out of every 6 in Europe. What was previously unlimited is now strictly curtailed. And this is the reason we are sweating it out on a bus. Time. We just don’t have enough.

When we started out on the trip there was a very loose itinerary for travel, but somewhere we both really wanted to visit was the country of Slovenia. Looking at pictures of its impossibly turquoise waters, flower-covered hills, winding forest roads and reputation for great mountain biking it was high on the agenda. Also high however were the mountains and milage for us to reach it in our Brexit limited time frame so, along the way, we made the decision to catch the bus from Lyon to Trieste in Italy and cycle over the border to Slovenia a short hop away.

Stumbling off of the bus at 7am, sweaty and disorientated through lack of sleep we were grateful of the calm and coolness of a city just coming awake. Equally welcome was the powerful Italian coffee, a thimble size cup of rocket fuel which did it’s job well. I must learn how to order a long coffee in Italian though!

We’ve less than 3 days in Trieste and Italy however, just enough for a rest day and a day of sightseeing before cycling off to the border.
Negotiating the 6 miles to the hotel in early morning Italian traffic was a shot of adrenalin more powerful than coffee and by the time we reached our budget hotel on the industrial outskirts we we fit for nothing other than collapsing thankfully into a clean bed for the longest nap ever.

The following day was a tourist day. One of M’s former colleagues, and a native Italian, had fortuitously been visiting family nearby and kindly made the trip into a scorching city with his daughter to show us around and  teach us how to order coffee!

We learn all about the city’s colourful and turbulent history from our native guides as I try out a cafe lungo (in the hope of a long coffee). The lungo when it comes has exactly 3mm more water than my previous espresso but it’s strong, delicious  and works it’s magic though and sets us off on a city tour past Roman remains (very commonplace in Italy as they tell us) to the castello di San Giusto an imposing fortress, garrison and one time prison, standing guard over the town. Local intel from the coffee shop meant that happily we didn’t have to slog up the numerous steps to the castle but smugly ascended via a secret and very nuclear bunker-esque lift in the cliff base car park. 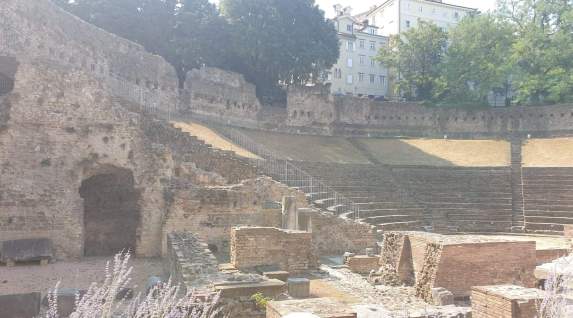 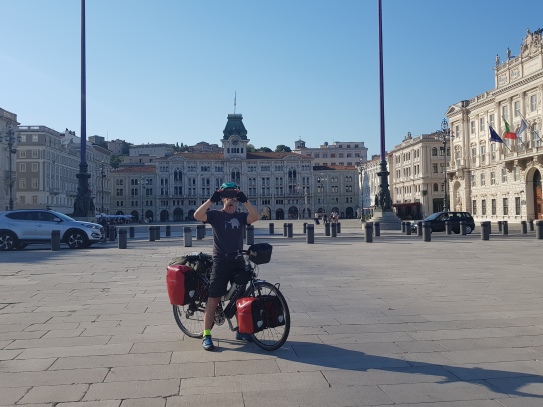 Trieste itself has a long and complicated history of citizenship. A prime  trading and strategic deepwater port it came under the control of the Austro-Hungarian empire in 1382.  Fought over by Germany in the second world war and coveted by the Chinese who tried to buy it! In 1947 the city itself became the free Territory of Trieste, for 7 years an indendent state until being dissolved/subsumed into Yugoslavia and Italy in 1954. Being close to Austria, Slovenia and Croatia the population and culture is as ecclectic as the history.

Back at the castle and the views reflect this as well as the mix of modern and old. Dominated as they are by 2 enormous cruise ships, just some of many that disgorge their human cargo into the city each day in their thousands alongside their air pollutants, a growing local problem.

Although grateful to visit I always like to get away from the big cities and, the next day, riding out of Trieste past another huge castle, the Miramare, dodging drivers, car doors, potholes, tree routes and disappearing bike lanes it’s a relief to finally get onto to quieter roads.

I do miss the clear and structured bike lanes of France. Italy is far more like the UK, with a hotchpotch of provision.
As the countryside unfolds so too do the pretty Italian villages, crumbling red tiles, fields of grape vines and a backdrop of mountains getting ever closer.
The temperatures remain meltingly in the high 30s with a hot wind and the afternoon touching 47 degrees celsius at one point.
More worrying is the growing sight of a large forest fire nearby. We are literally stifled by the smoke in one area until the wind changes and, as the day wears on, so too do the plumes of dark smoke, underlit by flames.
By mid afternoon, baking in the sun’s unrelenting glare we reach the impressive border town on Gorizia. We weave, heat-dazed through it’s baking and mostly closed streets looking to buy food for dinner but no joy, it’s Sunday of course!

Just a mile or so out of town we pass quietly and unceremoniously across an unmanned border. A ‘welcome to Slovenia’ sign on the verge and another asking drivers to keep their headlights switched on at all times.
We’re here! 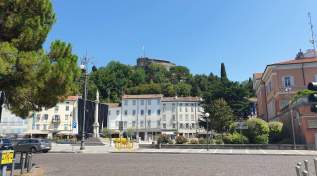 Our campsite is only a couple of miles along the road, bizarrely in the garden of a budget hotel deep in an industrial estate. It has toilets, showers and shade however and, the travel gods must have taken pity on us as, less than 50 metres away, is Reservoir Dogs, a small micro-brewery with a secluded leafy garden and more than 20 beers on tap. Not only is it open it also sells pizza.
Welcome to Slovenia, I like it here already!

If you enjoy reading about adventure, travel, cycling or all 3 why not check out my book: How To Cycle Canada the Wrong Way.

It’s the story of a forty-something woman with no clue in life and no cycle touring experience. What she does have is a sense of adventure, a second hand bicycle and a skirt and the idea of riding across Canada….the wrong way.

Available on Amazon in e-reader and paperback formats.

8 thoughts on “Brexit, Buses and Breweries: Trieste to Slovenia”