Physics, and the application of, has never been my strong point. In fact we gratefully parted company in my early teens after I set fire to the school lab during an experiment and I’ve been happily oblivious since.
Riding bikes however, I’ve discovered you just can’t get away from the subject and the effect is has on daily life. Take hills for example. Seriously, please take them! For the last 2 weeks our route has finally veered away from the river paths and up toward the mountains of the Jura region. It’s delightful to have a different variety of alpine landscapes to replace the flatness, but I’m feeling the elevation gain. Normally I love hills, being of a smaller physique I’m designed for climbing as M always reminds me, him having a more robust frame.
But now he’s climbing, if not effortlessly, then more easily. Why?!
The simple truth is physics. On a regular ride I would be pushing less than two thirds of M’s bodyweight up over the climbs.
The touring bikes however have changed that and now, we’re both loaded down with a similar luggage/bike weight (34 kilos, give or take a couple). Whilst this may be perfectly equitable in a horse race/handicapping system to even things up, as a percentage of bodyweight I’m now hauling an extra 63% of my own weight compared to M’s 44% ratio.
I have much time to think about the unfair physics of this whilst grinding up hills and staring at M’s receding backside. 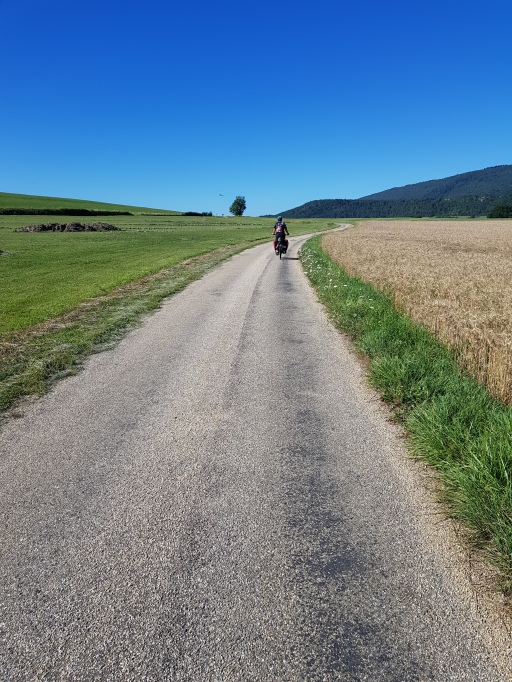 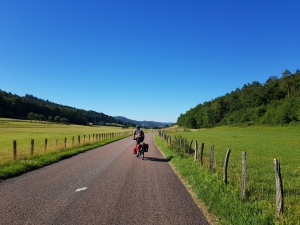 Bodyweight is of course the blessing and curse for professional cyclists too. With Tour de France currently in full swing, those poor, heavy sprinters are gritting their teeth on the mountain stages whilst their wiry GC counterparts just fly up hills. I know this firsthand too as we went to watch it and the whole, fantastic spectacle.
Stage 8 from Dole to Geneva was passing not far from us, so how could we not go. Even if you’re not a cycling fan, the atmosphere of Le Tour is hard not to get caught up in.
We’d decided to ride the 10 miles from our campsite in Bon Lieu to position ourselves half way up the long category 3 climb to the Côte des Rousses, outside of St Laurent en Grandvaux.

The first mistake was stopping on route to pick up a quick snack.  I knew I shouldn’t have let M loose in the supermarket when he returned with 2 bulging bags of food and 2 six packs of beer which had to be lashed on our bikes just before we started the big climb. Much cursing later and we picked our spot by the roadside just before the route was closed to traffic. There was a real carnival feel with families, cycle fans and picnics everywhere. At 1pm the ‘caravan’ rolled on through, 30 minutes of parade vans and sponsorship vehicles throwing free stuff to the crowd, everything from t-shirts and hats to coffee pods and luggage labels. Fights broke out in the scramble for freebies, as harmless looking old men in lycra turned feral in an attempt to grab a cap or pen!

Two hours later and a bottle or 3 of beer and the main event drew near. We’ll at least their support vehicles. Literally hundreds of news vans, crew cars, mechanics, doctors and spare bikes were ferried past until, in a swish of wheels and cheering the cyclists came into view. The pace was (for them) relaxed and these giants of cycling whizzed right by us within inches. My main impression of Tadej Pogačar (the yellow jersey) et al was how tiny they all were. Excellent climbers, they made it look effortless but then of course they weren’t carrying 6 packs of beer or a tent either.

The spectacle and day out was well worth it. Maybe less so was coming away with 5 hats and 2 tshirts between us. Despite the fact we will never wear them all and have no room in our panniers they are souvenirs of the day. 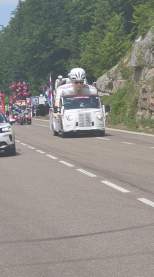 After Le Tour it’s time to put those forces of physics to the test again as we head back down the mountain to the melting 38 degree heat of Lyon, my weight being helped along by all those extra free hats.
Next stop a 13 hour night bus to Trieste, Italy.

To date we have covered 912 miles (I miscalculated previously) in 31 days, with 27,210 feet of elevation.
A huge thank you to 2 wonderful warm showers hosts in Moulins and Montchanin who gave us a unique welcome and much appreciated creature comforts. 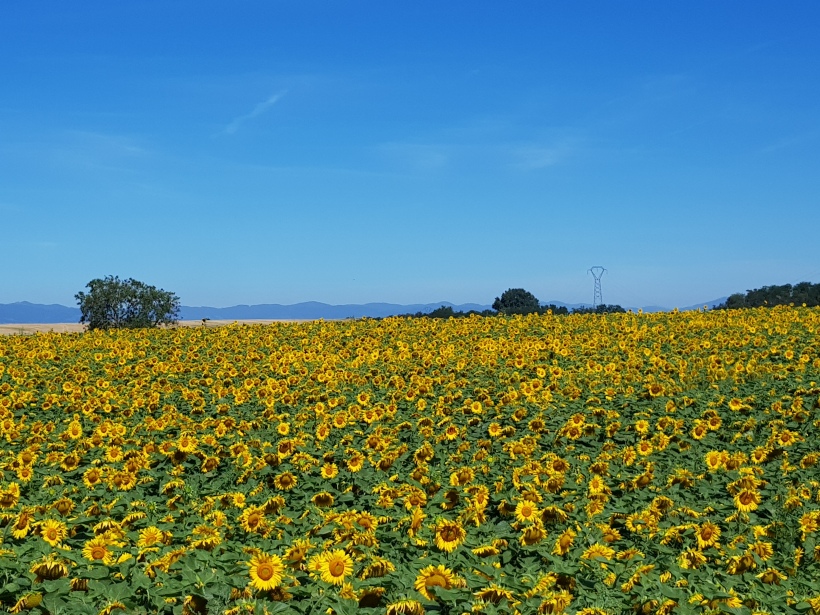 One thought on “Physics, Le Tour and riding up hills with beer.”