Obviously mine hasn’t been blog writing. It’s amazing, with so much time to write now how the impetus has completely passed me by. But, whilst I may not have been writing I have been otherwise gainfully employed in (many, many) other projects.

I don’t know about anyone else but my ‘to do’ list has never been so clear, to the extent that, when I finish a job that wasn’t on the list, I write it on there just to have the satisfaction of crossing it off again. Even activities that have previously held zero interest such as weeding and washing the car are now smugly ticked off.

One thing that had been on that list for a while though was to give Claud my touring bike some serious love and attention, including a completely new paint job.

The idea for repainting was born a while ago from one of those random conversations at a friend’s birthday party. Chatting to an artist, and fellow old-bike enthusiast, he described beautifully how easy it would be to give the bike a bespoke and quirky paint job. By the end of the chat I had visions of full Leopard print or zebra striped frames swimming round in my head. I was going to do it, I was going to completely repaint my beloved bike.

What I forgot to factor in however was that I have very little artistic talent, patience or painting materials, oh and time!

Undaunted, a quick trip to the local craft shop secured me 4 small pots of enamel paint (the kind used to paint plastic models of planes) and an assortment of brushes and stencils. The local hardware store supplied primer, black metal gloss paint and clear lacquer spray. As for having the time…., as the doors closed at home and the UK entered lockdown mode I readied myself to unleash my hitherto undiscovered inner-artist! 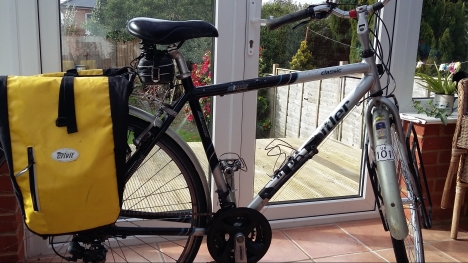 Day one and it soon became apparent that before my inner artist could get to work, my outer mechanic was going to have to get very busy. I would say that my mechanic-ing ability is on par with my painting one i.e. poor but I needed a clear frame before I could do anything else so it was time to strip Claud.

Turns out that taking things off is surprisingly easy, you just undo every nut, screw and cable in sight. How I’ll reassemble it again is a project for another day. In fact the only thing I can’t liberate from the frame are my front cranks which seem to have become welded to the bottom bracket. Oh well, nothing I can’t cover up with a plastic bag and tape (to be fair, this is my general approach to any D.I.Y). 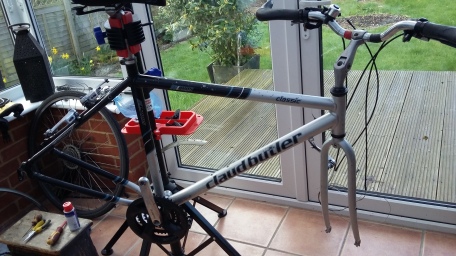 With the frame stripped, lightly sanded with wire wool and cleaned down with white spirit I’m ready to begin.

It’s actually quite daunting as I dip the brush in the primer and start gingerly applying it to the frame. Claud may be the least valuable of my bikes by far in monetary terms, having picked him up on ebay for around £60 but emotionally he is priceless, having carried me on solo trips across Canada and the U.S. Now here I was potentially defacing him. Primer applied though there was no turning back. 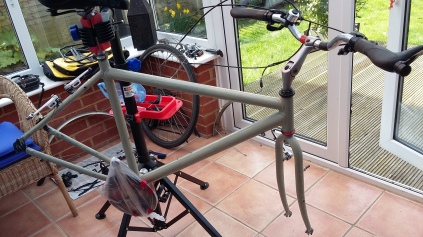 Claud actually looked surprisingly good, many of the frame dents and scuffs had been smoothed out with his new coating and something different was emerging.

Next up was a coat of black metal gloss paint. I’d decided that the practicalities (or my limited ability) of spraying were a non-starter so I opted for what seemed the safer option of a paint brush. After 2 coats of black gloss the frame, ignoring the odd drips and runs, was looking quite rejuvenated.

In an ideal world, spraying would definitely give a neater finish but Claud was never a neat bike and this project was not about a pristine coat of paint. I figured too that the decoration would also cover any imperfections. 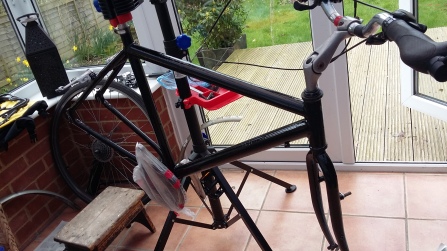 Frame prepared it was time to unleash my inner artist. The grand plan was to cover Claud in painted ivy leaves following the contours of the frame. When faced now with the large expanse of metal, with all its tubes and angles, I was immediately glad that I had bought a stencil for my design. Working out how to fit its intricate patterns to the frame however was a whole other issue.

After much experimentation (and swearing) I found that taping the stencil in a twisting-corkscrew gave the best effect. Ready to g and after opening all my carefully chosen pots of enamel paint in varying shades of green I soon discovered however that only one of the paints actually shows up on Claud’s black frame. I am therefore limited to one colour and, with only one tiny pot, I need to be very sparing with it.

My first attempt using the paint brushes also fails badly as the delicate patterns smudged and blurred with the slightest movement of the stencil.

M, my partner, on being invited to view the work in progress stared at it for a long time before pronouncing, “hmm, looks….. splodgy. Was that what you were going for?”.

No, that was not the effect I was aiming for and annoyingly he’s right. Time to rethink.

Next I try using a sponge but this soaks up the paint without coating the bike, then I use a rag, same thing. Finally and lacking inspiration I try a cotton bud and amazingly this works.

It takes ages. Dabbing away at each intricate ivy leaf on the stencil, waiting for the paint to try then painstakingly removing the stencil and re-taping it around a different part of the frame. Just to add to the fun, every so often the stencil also peels away from the frame whilst I’m painting and pings messily across the room. Aargh!

Slowly however the ivy pattern emerges and starts to cover Claud and surprisingly…..it looks ok!

I even sand down and repaint the original splodgy bits using fresh black paint and my new stencil technique. It takes time but then I have a lot of that right now.

Finally, around 2 weeks after starting, the frame is complete. Swathes of ivy adorn everything from top tube to rear forks. The last finishing touch is to add Claud’s name in discreet silver lettering nearer the steerer tube and to spray over a layer of clear, protective lacquer. 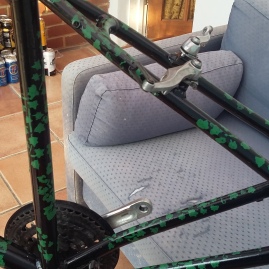 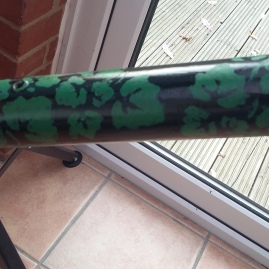 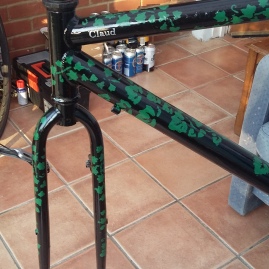 I’d be more than happy to finish now with a satisfied sigh but, if Claud is ever to show off his new paint job in public, I need to put back on everything I took off, basically the whole drive chain.

To say it’s a grim labour would be an understatement but, there was also a measure of pride in there when me (and You Tube and some assistance from M) work out how to re-thread (and on occasion replace) brake and gear gables, how to mount front and rear mechs, fit and adjust new brake blocks and generally turn a painted lump of aluminium back into a functional bike.

After some initial deliberation I’d decided to retain (and not paint) Claud’s original mud guards, covered as they were in the provincial flag stickers of Canada from my cycle tour a few years ago. The final thing I do is re-install those mud guards and I’m glad I kept them. They make the bike what it is, an amalgam of old and new, my history and the promise of other adventures to come. As for future travels, we do have plans Claud and I, we’ll just have to wait a little longer I think. 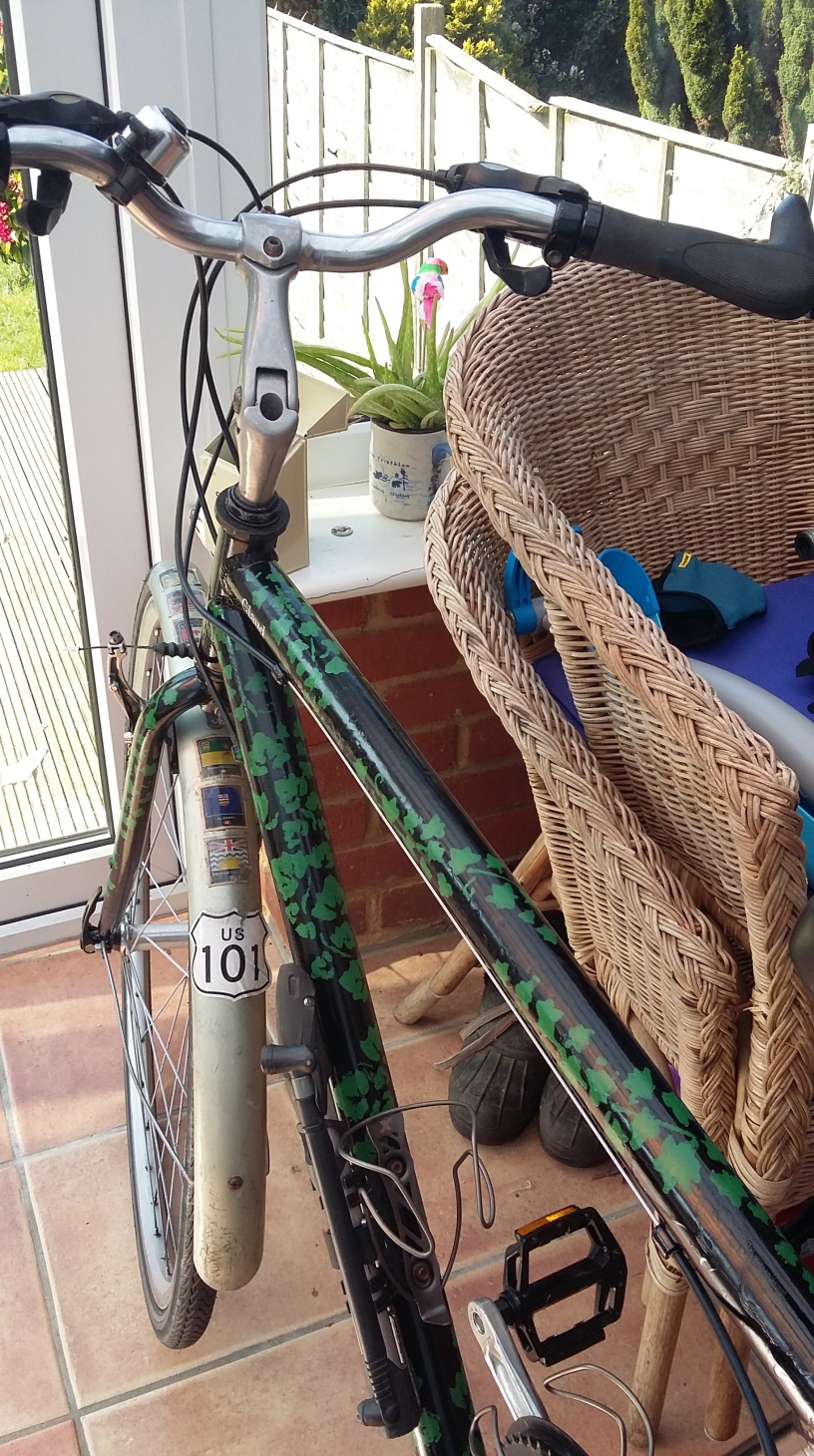 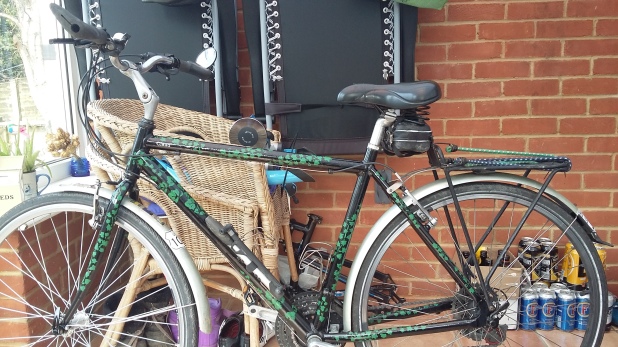 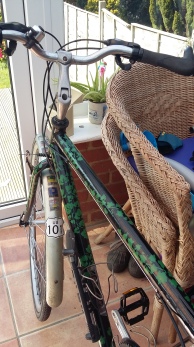 Total cost of project, approximately £15 for paint and materials.

If you enjoy reading about adventuring, travel, cycling or all 3 why not check out my book: How To Cycle Canada the Wrong Way.

It’s the story of a forty-something woman 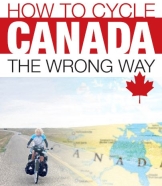 with no clue in life and no cycle touring experience. What she does have is a sense of adventure, a second hand bicycle and a skirt and the idea of riding across Canada….the wrong way.

Available on Amazon in e-reader and paperback formats.

4 thoughts on “Everyone needs a covid lockdown project”