It’s the morning of the winter solstice today and, taking initiative from the Druids at Stonehenge I levered myself out of a warm bed in the early hours to head to the beach and greet the sunrise. The chilly, sleep-addled start was pretty soon forgotten though as a dark, cloudy and menacing sky reluctantly cleared, giving way to a fierce red dawn.

I’m also finding that there’s something about this time of year that makes people reflect on both endings and new beginnings.

Officially the solstice is the beginning of winter, but paradoxically it also ends the decline in daylight as the days again begin to lengthen in a climb towards spring.

So I’m also reflecting a little. This has been helped along by an email from the future. Ok, not as sci-fi as it sounds. A year ago I came across a website called Future Me this ingenious site allows you to write an email to your future self at any point (and yes there are folks who have set them to be delivered hundreds of years from now) and then have it delivered at a specified date in the future.

So that’s what I did – and one year after writing it was recently delivered to my inbox.

It was surprisingly evocative, not only because of the gap between my intended plans and what life had in store, but also because I’d written it at the very end of my long cycling adventures last year.

Having completed my four month trip from Toronto, Canada to San Diego in the US, I’d opted for what seemed the easy route back…. 72 hours on the Greyhound bus from San Diego back to Toronto…..with Claud the bike….. on Thanksgiving weekend.

For the Brits and the other uninitiated Thanksgiving is a stupid time to travel anywhere in the States, by far the busiest time of the year. Every transport option is pricey and overbooked and no airline could guarantee flying Claud. After 5000 miles together there was no way I was risking leaving him behind so, Greyhound bus it was. 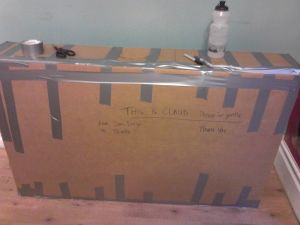 For anyone who’s ever travelled with a bicycle in a bag or box, you know how unwieldy it can be. Add to that the rest of my gear…tent, panniers, sleeping bag, clothes etc all squashed into a suit carrier (purchased for $5 in a thrift shop) I was hauling around approximately 100lbs of gear in 2 huge packages.

Whilst Greyhound notionally offer to shepherd any baggage through all changeovers, everyone I met, including Greyhound staff strongly advised not letting it out of my sight. Claud had been dismantled for the ride and unceremoniously stuffed in a large cardboard box, so it meant collecting this and the bag at every one of the 5 changeover points and hauling it across terminals on to the next coach.

With everything packed on board for the first leg I settled into my surprisingly comfy seat. Taking advantage of the on board wifi I began to write my Future Me letter, thinking how civilized bus travel had become. Oh, how wrong was I!

Things began to unravel shortly afterwards as the coach filled up rapidly and to bursting point. This, it seemed, would be the default for the entire journey. My seat companions too tended to be on the larger side of, well, large and over the course of the next 72 hours I ran the whole gamut of chatty, flirty, smelly, nose-pickers, ear cleaners, snorers, spreaders and downright bizarre seatmates.

Things took a further downward turn when the driver of the first bus, not in any hurry, kept stopping for cigarette breaks. As time trickled by my anxiety about making my first connection grew to fever pitch before finally breaking in a wave of despair as we coasted in to the terminal having missed the connecting bus by 10 minutes.

My flimsy bus schedule now went completely to pot, rebooking on to other buses was an impossibility due to the chaos of Thanksgiving travel. Long lines of angry to murderous passengers queued to grab any remaining seats.

I’m usually quite a philosophical traveller but the fatigue of the bike trip seemed to combine with a deep-seeded need to be away from the chaos. After negotiating, arguing and shamelessly pleading with the counter staff it seemed my tickets could only be rebooked by adding another 2 days to my already 72 hour journey.

At this point I lost the plot. Dragging Claud’s box and my luggage I elbowed my way to a departing bus that was going in the vague direction that I wanted. Physically shoving all my luggage in to the hold I marched up the steps and just sat in the nearest vacant seat. I don’t know what I’d have done if anyone tried to move me, but it wouldn’t have been pretty.

The next hours and days passed in a blur. I felt like I’d entered some kind of special Greyhound hell where time and the world became an amalgam of road, gas stations, dozing, changing seat mates and bus terminals.

At the latter I became adept at leaping off first, grabbing Claud and the bags and hauling them directly to the front of the next queue. There was often a 2-5 hour wait between connections but, as all buses were heavily over booked due to the holiday, I learned early on to stake my claim. A grim determination/desperation enabled me never to be left behind. Fatigued and sometimes frantic staff attempted to oragnise the chaos but it was much like trying to herd cats. They did however seem to liberally issue free food vouchers to stave off mass lynching and I became adept at procuring these.

Back on board, I endured the eclectic companionship, unique to bus travel. Recently released convicts clutching their bin liners full of possessions, screaming children, the drunk, the obnoxious and, my personal low point, a woman directly behind me reading aloud from the bible for 6 hours straight.

At one border crossing a team of sniffer dogs boarded, people were randomly searched and a discovery of something in the hold led to several passengers being hauled off into the night and my admittedly uncharitable thought of – ah, more seating room.

Finally, finally pulling into the Toronto bus station over 3 days after the start of the journey I felt giddy and unbelieving that I’d actually made it. There were many points I felt that, like some ancient Greek quester I had been cursed by the Greyhound Gods to wander the roads of the US forever.

It’s now one of those journeys I can look back on with fondness and humour, as well as the surety I will never do it again (well probably).

And as for Future Me, that is what I should remind myself.

The email I wrote on that long journey, when it arrived was upbeat, talking about the cycle trip and my hopes for the coming year. Looking at what I wrote to myself on that trip and comparing it with the actual 2014, the contents were bitter/sweet.

I would never have guessed then what was in store, or the directions in which life would take me, but, like the journey from hell, looking back I can appreciate that journey as a whole. I’m glad that it’s behind me, it’s not the route I would have taken, however I’m happy to have arrived at where I am now. Myself and Claud pretty much in one piece and looking forward to new adventures. 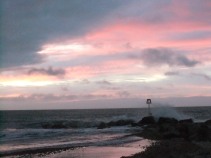